5th Quran memorization competition for all blind people in Gaza

Alhamdulillah we completed the 5th Quran memorization competition for all blind people in Gaza. This year 40 people took part and memorized Surah Al AnAam. The winners were:

It is tough for Gazans to live under seige and occupation

It is tough for Gazans to live under seige and occupation, more so for the disabled. As part of our efforts to promote the reading of the Quran in Braille, Alfitrah Foundation holds an annual Quran memorisation competition for the blind in Gaza . We advertised on the radio , social media and through NGOs and universities that work with the blind. We started with surah alBaqarah in 2015, and this year the competitors need to memorise Surah al-An'Aam. 40 people took part , young and old from all over Gaza. As always our partners in Gaza are Dar Alquraan AL Kriam and Viva Palestina Malaysia

Alhamdulillah this September we have started classes to teach people how-to read the Holy Quran in braille. The teacher is ustazah Halimah who is very experienced and currently volunteers teaching kids the Quran in braille at the government school for the visually impaired in Batu Road .

AlFitrah foundation gifted a refreshable Braille display and a brailler to two visually impaired students who have just joined sixth form at St Johns institution . Hanafi and Daniel were the top students last year in the SPM exams at Setapak High School for the Blind.

Hanafi's story is very moving, he lost his mother two months after losing his vision to glaucoma at the age of 16. As a result of losing all sight , he had to move to a new school and spend two years learning Braille before being able to sit for the SPM exams . Daniel became his best friend who helped him learn Braille and they both achieved 7A's in the SPM exams last year.

Daniel had requested for the Braille Me machine which is a portable Braille note taker and allows him to print out lessons from class in Braille and share them with the other Blind students in class . May Allah bless them with a successful future .

Bilal is based in London and had been teaching the blind how to read the Quran. He requested Braille primers for teaching as well as various Islamic books.

Dr Sariat is a lecturer at a college for special needs students in Oyo, Nigeria and runs courses for teachers of the blind. We look forward to exchanging files of Braille Islamic books so that more people can benefit from us sharing knowledge. 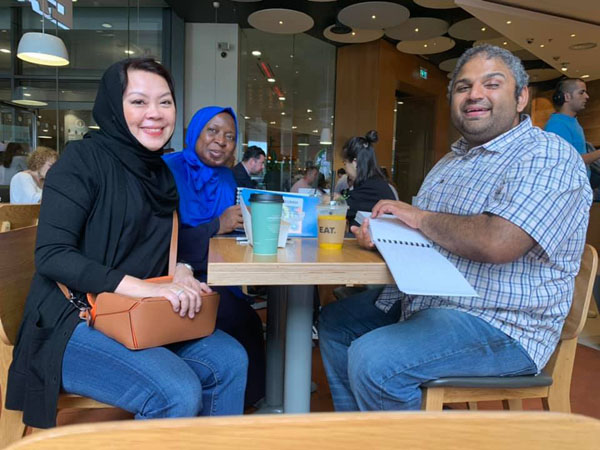