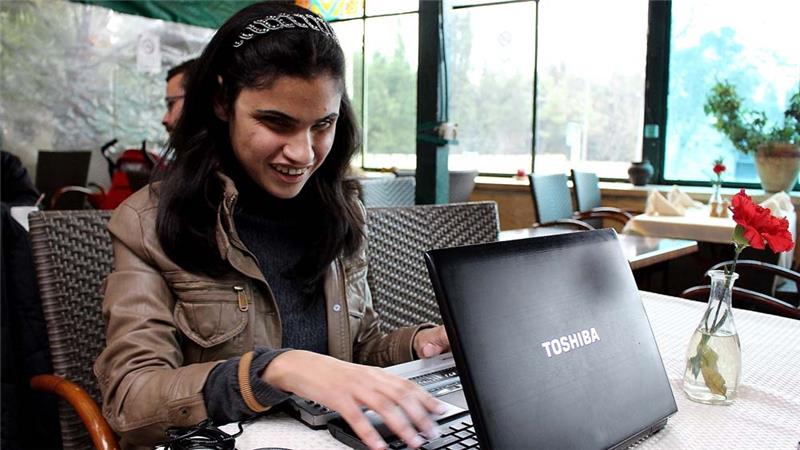 Jerusalem - Born blind, Budour Hassan lacked confidence as a child when visiting new places or trying new things. Even stepping outside was a challenge.

Now, at the age of 26, she seems worlds away from her childhood in Nazareth.

"There have been times at protests, when Israeli police have been beating people. There has been a lot of tear gas, and people have been shouting, 'She can't see, she can't see' as a way to try and protect me," Hassan told Al Jazeera, sipping on a double espresso.

"You know, I understand why they say this, but if I'm honest, I don't like this so much."

Covering protests and clashes has become second nature to Hassan, a Palestinian journalist who reports for several media outlets and websites in Arabic and English.

Hassan first found journalism at  21, writing sports reports for an American website before turning her pen to Palestine. Her move from Nazareth to the busy streets of Jerusalem at 19 was daunting, but learning to negotiate the narrow alleys of the Old City became a confidence-booster, she said.

It is amazing, I think, just how many things can be missed if you are not listening well.

"The Palestinian areas of Jerusalem, as well as the West Bank, are incredibly hard to navigate, even for people who have perfect sight," she said, laughing.

As she walked towards Damascus Gate, crowds of people rushed by, vendors shouted and vehicles honked their horns, but Hassan did not seem fazed.

Hassan, who writes on a laptop with via a braille keyboard, knows she has come a long way from her more introverted past. She has devoted herself to covering the sometimes forgotten stories of Palestine, such as the aftermath of home demolitions, or the continued suffering of families who have lost a child.

"The most important thing for me is to get the human angle of things. What I try to do is just be the storyteller, and put everything into a political context," she said.

"There have been so many cliches [written by journalists], especially about Palestinian mothers. There is no such thing as a Palestinian mother. Everyone handles grief and loss differently; of course, there are things that you can find in common, but you can't just create this idea that there is a stereotypical Palestinian woman or man, Palestinian mother or father. It is important to talk to them and give them the right to say whatever they want."

INTERACTIVE: Do all roads lead to Jerusalem?

Hassan admits that there are also challenges to being a blind journalist. She often gets lost when out covering stories, especially in the occupied West Bank, and has to rely on strangers for help. She knows that she misses details by not being able to see, such as the way someone's face reacts to questions, or how they use their hands.

"I've learned to become a very good listener," she said. "I focus on their voice, on their words, the lilt of their voice - the very small details that I imagine if you focused on someone's face too much, you could miss."

Hassan has also heard people make negative remarks about her when she is out reporting, suggesting it would be better for her to stay at home. While this can be hurtful, Hassan said, she hopes that her continuing work will help to change people's perceptions.

"And when you are an Arab woman with a disability, you have to prove yourself more. It takes people longer to take me seriously than they do for a Western, male, sighted journalist."

Despite the challenges, Hassan remains optimistic about her future, and hopes one day to travel to Latin America to work.

"You have two ears and two eyes," she said. "Well, I have four ears for my work. And really, it is amazing, I think, just how many things can be missed if you are not listening well."

She has been beaten by Israeli soldiers and even collapsed at one protest after inhaling tear gas, but she remains undeterred.

"People are surprised that someone can be blind and a journalist," she said with a slight, infectious grin.