We have 2 projects this Ramadan to help the blind :

The second one is the Ramadan Iftar program for the 44 students of AlBasiir School for the Blind in Somalia. It costs RM12 ( USD3) to provide a child with suhoor and iftar daily.

We would like to feature a child everyday from the school, please donate to this program via our website www.alfitrah.net stating whether you are donating for Gaza Quran camp or Somalia iftar.

Amal lives in Barire, Awdhegle district, lower Shabelle region of Somalia. She is the second born in a family of four with one sibling also blind.

Her father also born blind but later regained his sight after an operation.

Amal's parents were prominent farmers in Barire area with a large tracts of farming land before the war, but since they hails from a minority clan with Arabian heritage their land was taken by the prominent clans and now they rely on a small piece of land which they cultivate for subsistence.

Unlike her father who was operated at early age since then the family could afford it, she was not operated due to poverty, lack of medical facilities and civil war, by the time she joined AL­BASIIR SCHOOL FOR THE BLIND AND DEAF­BLIND Iskuulka Indhoolayaasha Al-Basiir it was too late to operate her and restore her sight.

Amal is very bright in class and grasp new topics easily, she enjoys teaching her classmates in areas they did not understand in class. She aspires to be an advocator and help others. 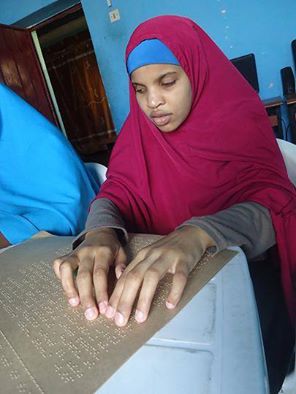